We work in the field of social work to help the poor and needy with free medical aid, women empowerment, skill development and environmental conservation and protection.

To eradicate poverty and promote self-reliance by improving the quality of life of the poor.

The Gramin Samaj Kalyan Vikas Manch (GSKVM) is charitable, secular, Indian, non-profit, non-government voluntary organization (NGVO) of Palamu, Jharkhand. It serves all the deprived humanity without distinction of race, caste & religion. The organization empowers a society based on the value of equality, justice, democracy and brotherhood by the valued dedicated volunteer and ideologists of Maulana Azad, Bapu, J.P. and Mother Teresa.\r\nTo eradicate poverty and promote self-reliance by improving the quality of life of the poor, deprived community through meaningful socio-economic growth in all phases of life and to educate, organize, advocate and empower the rural poor for promoting development as a liberating force aimed at gender equity, social justice, self-empowerment and entitlement realization.

An integrated approach to build a equitable and empowered society

Dreaming together for a better world for all; to establish just society based on the value of equality, Justice, democracy and brother hood, where no one remains hungry, illiterate, exploited, homeless and deprived of fundamental right. (A caring, sharing and self-reliant society founded on the value of justice, peace and love.)

To eradicate poverty and promote self reliance by improving the quality of life of the poor, deprived community through meaningful socio-economic growth in all phases of life. To educate, organize, advocate and empower the rural poor for promoting development as a liberting force aimed at gender equity, social justice ,self empowerment and entitlement realization . To promote support and develop a civil society by providing opportunity and securing rights of the underprivileged section of the society. Through effective presence with the poor and marginalized accompanying them as they empower themselves and affirm their dignity leading to fullness of life.

TI projects provide a package of prevention, support and linkage services to HRGs through drop-in- centre (DIC) and outreach-based service delivery model which includes screening for and treatment of STI, free condom and lubricant, among core groups, Behavior Change Communication (BCC), creating an enabling environment. We endeavour to provide people with accurate, complete and consistent information about HIV, promote use of condoms for protection, and emphasis treatment of sexually transmitted diseases. GSKVM DEOGHAR works to motivate men and women for a responsible sexual behaviour. TI Programme is supported by JSACS,Ranchi http://jsacs.org.in/

A WhatsApp call meeting among GSKVM/AMAN and 1ngo team were done today to plan next online meeting for NGOs representative on Government schemes and Legal aspects to be scheduled on 12 or 13 November 2022. Myself Md. Hashmat  Rabbani Secretary of Gramin Samaj Kalyan Vikas Manch and Chair of AMAN and Jashosree, Payal and Puja from 1NGO team participated. Link https://kutumbapp.page.link/ssnNq1RfVYFioJjf6

The girl from human trafficking rescued from Delhi was handed over to Ujjwala Home  by child welfare committee Latehar on February 17, 2022, on the order of Latehar CWC, her sister-in-law, Latehar district Mahua Dand block of Chutia Panchayat reached Ujjwala Home today, her sister-in-law said that she does not have bus fare to go to Mahuadand. Ward Commissioner of Ward 33, Smt. Chanchala Devi, who arrived at the farewell ceremony, cooperated by giving Rs 600 from her level

Smt. Laila Devi (fictitious name) aged 35 years was handed over to Ujjwala Home for her safety by city police station Daltonganj on October 1, 2022 at 9 pm along with two children, it was told that leaving her intact could lead to sexual harassment and other incidents including girl trafficking.

The first husband Birendra Paul left with two beloved daughters in a helpless state and fled with all the money, which the police are looking for.

With the help of ujjwala home counsellors and social workers, the first husband Birendra Paul was called, but Birendra Paul did not come till date.

He said in his investigation report that according to the Aadhaar card, the name of Mr. Pardeshi Lahare is mentioned in the father both irl child of the woman's husband, and this is the physical father.

He told that Mr.’s first husband was Birendra Paul, whom Mrs. married for the second time without giving up.

Give or leave, there is no system to take along

Give or leave, there is no system to take along, so come forward for the society.

Gramin Samaj Kalyan Vikas Manch is a registered NGO serving the marginalized section in Palamu district since 1990( 32 years). It is registered with NITI Aayog, Government of India No. JH/2009/0002734. Organization is celebrating Daan Utsav from 2-8 October2022.

The organization is running Ujjwala Home situated at  Birsa Nagar, Shahpur in Palamu district, where helpless orphans, women and girls freed from human trafficking are kept.

TB Free India campaign is being run by the organization since 2012, many awards have also been received, JSLPS is one of them. Many concepts of the organization have been adopted by the government. Full cooperation of all of you is expected in such noble works. 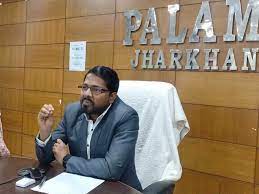 Gramin Samaj Kalyan Vikas Manch has driven Covid  19 Vaccination Campaign.100% Covid Vaccination executed in 51 Villages of 10 Panhayats in Pandu Block of Palamu District in collaboration with PHIA Founadtion and APF under Arogya Jharkhand Civil Society Network ensuring mainstreaming community for vaccination and has achieved 98% first dose and 87% of Second dose by mutual coordination with Health Department , District Administration Palamu. 20 Village volunteers engaged and achieved the target and uploaded the data on VaxIT developed by Azim Premji Foundation. Covid Vaccination has been proved lifeline to protect their life from Corona Virus in the underserved areas of Palamu,Jharkhand.BLTF MEETING,Convergence meeting,Innovation approach,IEC,ACSM,Pledge ceremony on the occasion of gandhi anniversat on 2 October done and team successfuly achieved the result

As per the National Family Health Survey-4 data for Jharkhand, every second under-5 child in the state is stunted (45 per cent) and underweight (47 per cent), and every third under-5 child is affected by wasting (29 per cent). Nearly 70 per cent of children between 6-59 months are anaemic. GSKVM Organized Healthy Baby Contest  to promote awareness to- wards positive health of the child. We collaborate with Anganwadi Centre under Bishrampur Project Office in Pandu Block during March 21-27,2022. This was a voluntary collaboration as per request from District Social Welfare Office, Palamu. Deputy Commissioner, Palamu indurate the campaign on 21.3.22. On the Occasion myself and other officers were present

Gramin Samaj Kalyan Vikas Manch(GSKVM) celebrated republic day and unfurled the national flag at Head Office Policeline Road, Daltonganj, Palamu. TI team also celebrated at TI Office at VIP Chauk,Deoghar. Secretary of Manch Md.Hashmat Rabbani on the occasion said that constitution of India came into effect on 26 January 1950 and turning the nation into newly formed republic. He added that Law and order are the MEDICINE of the body politics and when the BODY POLITICS get sick, medicine must be administered. Inmets of Ujjawala and all Team were present on the occasion. 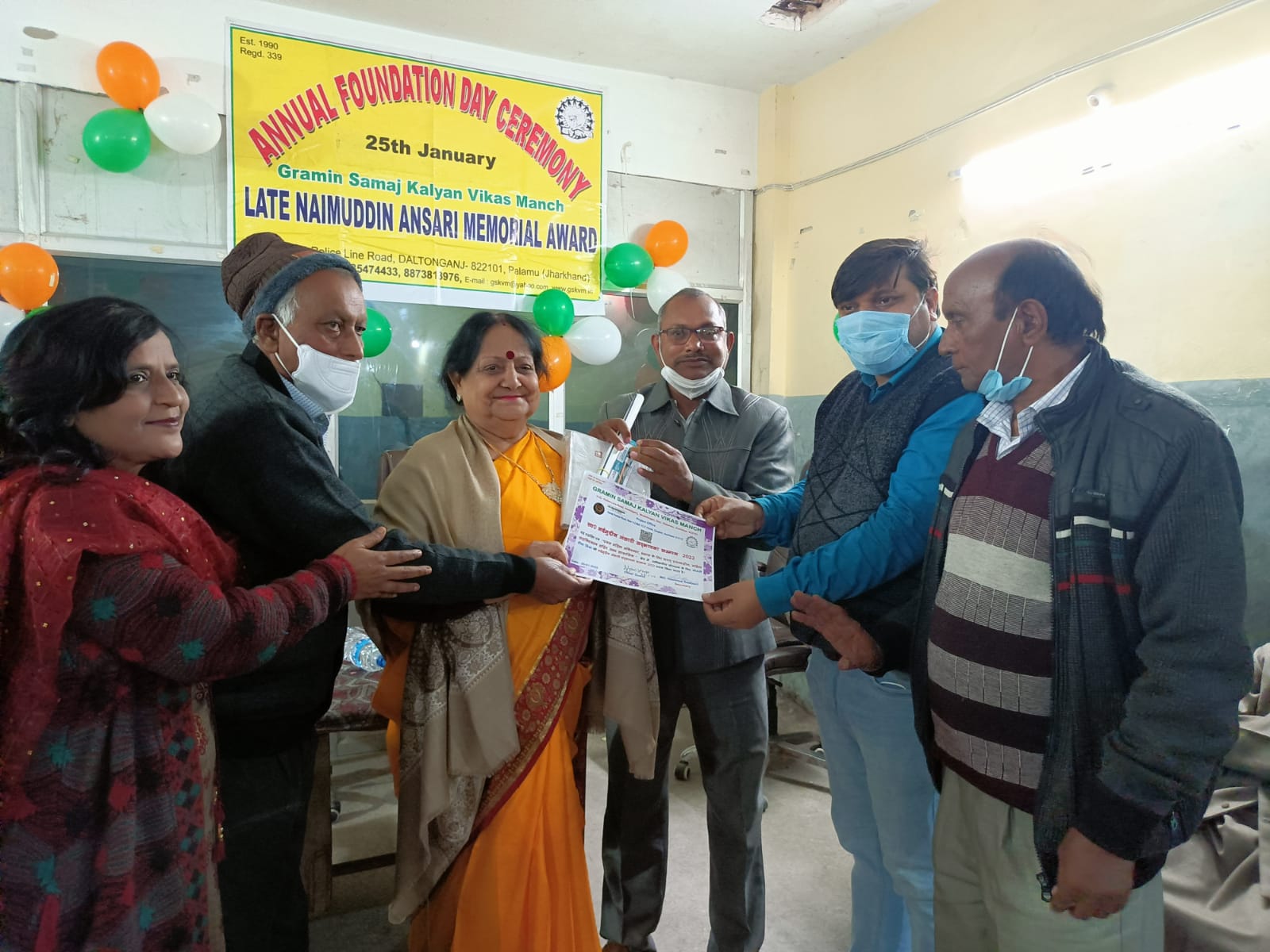 The full form of PMEGP is the Prime Minister’s Employment Generation Program. There should be more and more self-employed in the country and people should become job creators instead of seeking jobs. The central government is moving ahead with this goal. Pradhan Mantri Rozgar Yojana (PMEGP) is also a part of this campaign. GSKVM-Gramin Samaj Kalyan Vikas Manch has created the campaign with DIC Support. Pl Visit for detail PMEGP Online Application Registration (kviconline.gov.in)

PRERNA (Partnership for Rural Empowerment in RH Negative Awareness)Capacity Building of frontline workers of health and ICDS on Rh INCOMPATIBILITY and Hemolytic disease of the fetus and new-born in the PALAMU DISTRICT of Jharkhand by GSKVM in collaboration with CONEXUS Social Responsibility Foundation.

When a woman and her unborn baby carry different Rhesus (Rh) protein factors, their condition is called Rh incompatibility. It occurs when a woman is Rh-negative and her baby is Rh-positive. The Rh factor is a specific protein found on the surface of red blood cells. Most people are Rh-positive, but a small percentage of people are Rh-negative. This means they lack the Rh protein. Rh incompatibility symptoms in an unborn baby can range from mild to life-threatening. When Mother’s antibodies attack her baby’s red blood cells, hemolytic disease can occur. This means baby’s red blood cells are destroyed. When baby’s healthy red blood cells are destroyed, bilirubin will build up in their bloodstream. Bilirubin is a chemical that’s created from the breakdown of red blood cells. Too much bilirubin is a sign that the liver, which is responsible for processing old blood cells, is having trouble.Gramin Samaj Kalyan Vikas Manch (GSKVM)is working on Health intervention since its inception and to resolve health related problems, the organization is constantly engaged in capacity building of health frontline workers; therefore, the organization decided to undertake the above mentioned project in the 21 blocks of the Palamu district. CS,Palamu Dr. Anil Singh indurate the Training PRERNA. Total 46 Batches conducted in different CHC and ICDS in Palamu District, Jharkhand covering 2500 beneficiaries. 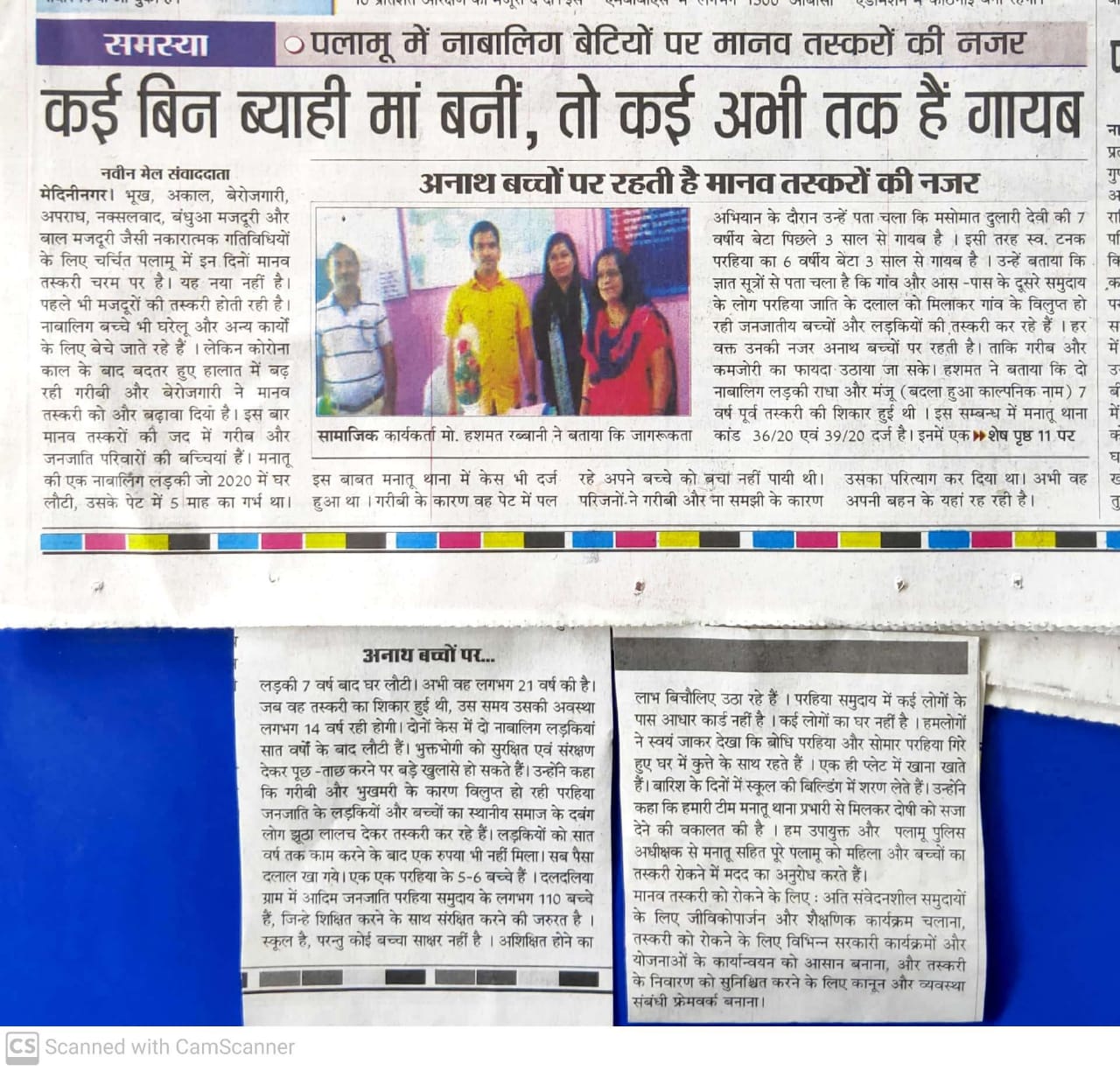 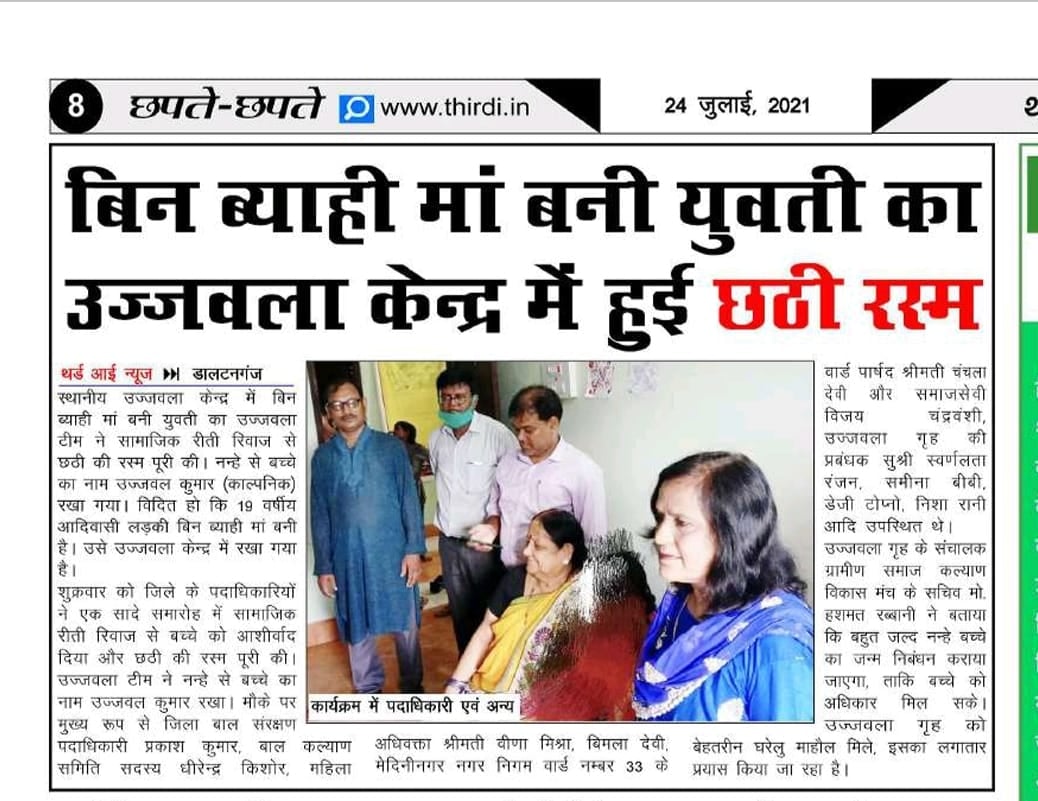 Rangoli, Advocacy and Awareness Campaign were done by Gramin Samaj Kalyan Vikas Manch for HIV Free Society. Theme focused on Know AIDS to Stop AIDS and Toll Free Number 1097 was highlighted World AIDS Day is commemorated around the globe on 1st December every year. It celebrates progress made in the battle against the epidemic – and highlights issues need to be addressed. Every year a theme is given and accordingly the theme of the year 2005 was “Stop AIDS, Keep Promise”

Hand Over to One Inmates of Ujjawala Grih Chhoti to her Family of Itawa ,UP

• 14 Units Blood were donated during COVID-19 Pandemic period to save one’s life. The campaign theme for this year's World Blood Donor Day is “Safe blood saves lives” with the slogan “Give blood and make the world a healthier place”. Some Slogans were flashed i.e. Gift a smile, gift a drop. A bottle of blood saved my life... Feel better, feel fitter, My son is back home because you donated blood. "Give food, - feel good for a day, Ma is coming back home because you gave blood. 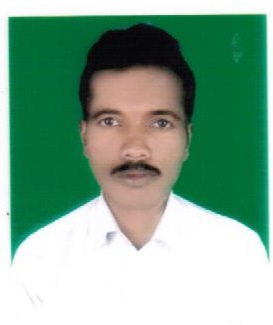 Make a generous donation to help us reach more beneficiaries.

All donations are eligible for tax savings under 80G.

Volunteer with us for making a difference in somebody's life and also it is a good opportunity for you to give back to the society. For more information, mail us at gskvm@yahoo.com